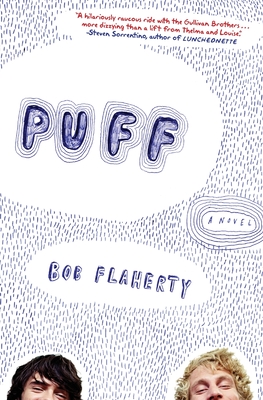 Puff takes place on the night of a severe blizzard in Boston during the 1970s. John and Gully Sullivan masquerade as Red Cross rescue personnel in order to maneuver around the city, trying to score a bag of weed before the night is through. Their misadventures, written by stand-up comic Bob Flaherty, are a riotous good time.

Meet John Gullivan, age thirteen, obsessed with the moles that dot most of his body. Meet his brother Gully, who can't stop laughing at them. Now meet the brothers ten years later, in the middle of the most ferocious blizzard anyone can remember. Set in an Irish working-class suburb of Boston in the 1960s and 1970s, Puff centers on a quest as the soon-to-be-orphaned brothers, posing as rescue personnel, attempt to steer their dilapidated van through insurmountable snow, all to score a bag of pot.

Trapped in their own ruse and forced to act the part of the saviors they are pretending to be, the brothers run into an endless stream of foes and obstacles: the cops, their childhood priest, a knife-wielding maniac, and the ill all stand in the way of their elusive high. A raucous caper, Puff is as hilarious as it is heartfelt and will resonate with old and young alike.

Bob Flaherty was born and raised in Boston and its surrounding towns and now lives in Western Massacusetts with his wife Annemarie, with whom he operates a birthday party business. They have 3 sons. Bob has, at various times, been an actor, a director, a cartoonist, a sportscaster, a talk show host, a tour guide, a storyteller, a disabled bus driver, a master of ceremonies, a hanger of gutters, a singer of national anthems and a baseball coach.

“A funny, well-crafted debut tale of sin, redemption, religious yearning...true and amusing and serious all at once.”
— Kirkus Reviews

“Unforgettable as the adventures of Butch and Sundance, and more dizzying than a lift from Thelma and Louise.”
— Steven Sorrentino, author of Luncheonette

“Flaherty has managed to craft a richly textured story with a wonderfully eccentric and wholly unforgettable family at its center”
— Jonathan Tropper, author of The Book of Joe and Everything Changes