Beasts of No Nation: A Novel (Paperback) 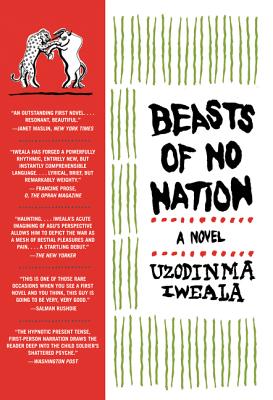 “Remarkable. . . . Iweala never wavers from a gripping, pulsing narrative voice. . . . He captures the horror of ethnic violence in all its brutality and the vulnerability of youth in all its innocence.” —Entertainment Weekly (A)

The harrowing, utterly original debut novel by Uzodinma Iweala about the life of a child soldier in a war-torn African country

As civil war rages in an unnamed West-African nation, Agu, the school-aged protagonist of this stunning novel, is recruited into a unit of guerilla fighters. Haunted by his father’s own death at the hands of militants, which he fled just before witnessing, Agu is vulnerable to the dangerous yet paternal nature of his new commander.

While the war rages on, Agu becomes increasingly divorced from the life he had known before the conflict started—a life of school friends, church services, and time with his family, still intact. As he vividly recalls these sunnier times, his daily reality continues to spin further downward into inexplicable brutality, primal fear, and loss of selfhood.

In a powerful, strikingly original voice, Uzodinma Iweala leads the reader through the random travels, betrayals, and violence that mark Agu’s new community. Electrifying and engrossing, Beasts of No Nation announces the arrival of an extraordinary writer.

Uzodinma Iweala received the Los Angeles Times Art Seidenbaum Award for First Fiction, the Sue Kaufman Prize for First Fiction from the American Academy of Arts and Letters, the New York Public Library Young Lions Fiction Award, and the John Llewellyn Rhys Prize, all for Beasts of No Nation. He was also selected as one of Granta’s Best Young American Novelists. A graduate of Harvard University and the Columbia University College of Physicians and Surgeons, he lives in New York City and Lagos, Nigeria.

“A startling debut…. Iweala’s acute imagining allows him to depict the war as a mesh of bestial pleasures and pain.”
— The New Yorker

“Remarkable. . . . Iweala never wavers from a gripping, pulsing narrative voice. . . . He captures the horror of ethnic violence in all its brutality and the vulnerability of youth in all its innocence.”
— Entertainment Weekly (A)

“Devastating. . . a raw and brutal story about the horrifying effects of cruelty and the incredible power of hope.”
— Atlanta Journal-Constitution

“This is an extraordinary book. . . . so vivid [and] powerful.”
— Sunday Telegraph

“Uzodinma Iweala is a gifted and brave writer.”
— Chris Abani, author of GraceLand

“A harrowing account of the intoxication of violence…that offers no easy answers or explanations.”
— Library Journal

“In Beasts of No Nation Uzodinma Iweala has crafted a voice that is equal to the demands of a blood-soaked reality. This is a work of visceral urgency and power: it heralds the arrival of a major talent.”
— Amitav Ghosh, author of The Glass Palace

“An astonishing debut. . . . Iweala writes with great restraint, mindful that the most important battle is for a boy’s soul: Redemption is possible, even if a return to innocence is not.”
— Kirkus Reviews (starred review)

“Iweala gives his hero a voice that is literary yet poetic. . . . The acute characterization, the adroit mixture of color and restraint, and the horrific emotional force of the narrative are impressive. Still more impressive is Iweala’s ability to maintain not only our sympathy but our affection for his central character.”
— New York Times Book Review

“Stark, vivid.... Written like a nightmare in progress, this story is a fever dream of voice and consciousness.”
— San Francisco Chronicle

“Uzodinma Iweala is receiving not just hype but praise from reviewers for the frighteningly convincing voice of a preteen soldier.”
— New York Magazine