The Girl with a Clock for a Heart: A Novel (Hardcover) 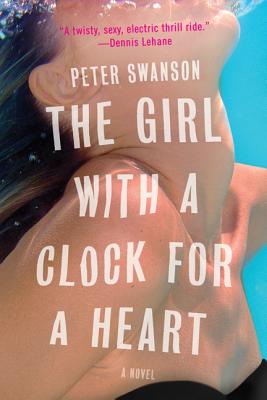 “This brilliant debut thriller has all the characteristics necessary for bestsellerdom! There is George Foss, an everyman protagonist who has never gotten over his first college sweetheart; Liana Dector, that first love, now a femme fatale who is as stunning as she is unpredictable; and a plot with surprises and twists on every other page. The Girl With a Clock for a Heart will take its rightful place beside my favorites from Michael Connelly and Dennis Lehane!”
— Jerry Brown, The Bookstore, Radcliff, KY

Already optioned for film, The Girl with a Clock for a Heart is Peter Swanson’s electrifying tale of romantic noir, with shades of Hitchcock and reminiscent of the classic movie Body Heat. It is the story of a man swept into a vortex of irresistible passion and murder when an old love mysteriously reappears.

On an ordinary Friday evening at his favorite Boston tavern, George Foss’s comfortable, predictable life is shattered when a beautiful woman sits down at the bar, a woman who vanished without a trace twenty years ago.

Liana Dector isn’t just an ex-girlfriend, the first love George couldn’t quite forget. She’s also a dangerous enigma and quite possibly a cold-blooded killer wanted by the police. Suddenly, she’s back—and she needs George’s help. Ruthless men believe she stole some money . . . and they will do whatever it takes to get it back.

George knows Liana is trouble. But he can’t say no—he never could—so he makes a choice that will plunge him into a terrifying whirlpool of lies, secrets, betrayal, and murder from which there is no sure escape.

Bold and masterful, full of malicious foreboding and subtle surprises, The Girl with a Clock for a Heart is an addictive, nonstop thriller—an ever-tightening coil of suspense that grips you right up to its electrifying end.

Peter Swanson is the author of three novels: The Girl With a Clock For a Heart, an LA Times Book Award finalist; The Kind Worth Killing, winner of the New England Society Book Award, and finalist for the CWA Ian Fleming Steel Dagger; and his most recent, Her Every Fear. His books have been translated into 30 languages, and his stories, poetry, and features have appeared in Asimov’s Science Fiction, The Atlantic Monthly, Measure, The Guardian, The Strand Magazine, and Yankee Magazine. A graduate of Trinity College, the University of Massachusetts at Amherst, and Emerson College, he lives in Somerville, Massachusetts with his wife.

“The book has pace to burn. It feels like a throwback to Ross MacDonald’s flawed but relentless work . . . glimmers with bright and original moments.”
— USA Today

“In The Girl with a Clock for a Heart a long-lost lover resurfaces, with chaos in her wake. A must read!”
— Harper's Bazaar

“[A] roller coaster thrill-fest of a ride, filled with deliciously wicked moments of mystery, murder, and mayhem, double-cross and deception. A cerebral noir thriller debut.”
— New York Journal of Books

“Swanson gives readers an adrenaline rush through all the hairpin turns.”
— Publishers Weekly

“The pace is fast . . . and the plot genuinely twisty . . . [It is] seemingly pre-measured for the movies . . . often to good effect; all in all, a quick, deft, promising first crime novel.”
— Kirkus Reviews

“The labyrinthine plot here has a grip of high-tensile steel.”
— Financial Times (UK)

“What do you say when a woman who broke your heart years ago and is wanted for questioning in connection to a murder pops back into your life to ask a favor? If she’s as alluring as Liana Dector, you say, ‘Yes.’ And hope you survive . . . The Girl with a Clock for a Heart is a twisty, sexy, electric thrill ride.”
— Dennis Lehane, New York Times bestselling author

“An edge-of-your-seat psychological thriller that dares you to turn the next page . . . This novel burns faster and hotter than a lit fuse, and you’ll be feeling its heat long after the explosive ending.”
— Wiley Cash, New York Times bestselling author of A Land More Kind Than Home

“The parallel stories unwind relentlessly with audacious and spectacular twists . . . An intense mix of noir, pulp fiction, and fun . . . The most unsurprising aspect of this book? It’s already been optioned for a film.”
— Boston Globe

“Who are literature’s most lethal women? . . . Here’s a new contender: Liana Decter, who causes endless heartbreak and occasional death in Peter Swanson’s compulsively readable [The Girl with a Clock for a Heart] . . . should be a contender for crime fiction’s best first novel of 2014.”
— Washington Post