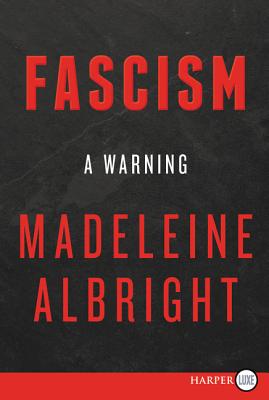 A personal and urgent examination of Fascism in the twentieth century and how its legacy shapes today’s world, written by one of America’s most admired public servants, the first woman to serve as U.S. secretary of state

A Fascist, observes Madeleine Albright, “is someone who claims to speak for a whole nation or group, is utterly unconcerned with the rights of others, and is willing to use violence and whatever other means are necessary to achieve the goals he or she might have.”

The twentieth century was defined by the clash between democracy and Fascism, a struggle that created uncertainty about the survival of human freedom and left millions dead. Given the horrors of that experience, one might expect the world to reject the spiritual successors to Hitler and Mussolini should they arise in our era. In Fascism: A Warning, Madeleine Albright draws on her experiences as a child in war-torn Europe and her distinguished career as a diplomat to question that assumption.

Fascism, as she shows, not only endured through the twentieth century but now presents a more virulent threat to peace and justice than at any time since the end of World War II.  The momentum toward democracy that swept the world when the Berlin Wall fell has gone into reverse.  The United States, which historically championed the free world, is led by a president who exacerbates division and heaps scorn on democratic institutions.  In many countries, economic, technological, and cultural factors are weakening the political center and empowering the extremes of right and left.  Contemporary leaders such as Vladimir Putin and Kim Jong-un are employing many of the tactics used by Fascists in the 1920s and 30s.

Fascism: A Warning is a book for our times that is relevant to all times.  Written  by someone who has not only studied history but helped to shape it, this call to arms teaches us the lessons we must understand and the questions we must answer if we are to save ourselves from repeating the tragic errors of the past.

Madeleine Albright served as America’s sixty-fourth secretary of state from 1997 to 2001.  Her distinguished career also in-cludes positions at the White House, on Capitol Hill, and as U.S. ambassador to the United Nations.  She is a resident of Washington D.C., and Virginia.

“Fascism: A Warning is dedicated to victims of fascism, but also to “all who fight fascism in others and in themselves”. Mrs Albright has earned the right to that ambitious mission-statement. At a moment when the question “Is this how it begins?” haunts Western democracies, she writes with rare authority.... [Yet] if her learning is to be expected, her way with words is a happy surprise, as is her wisdom about human nature. Free of geopolitical jargon, her deceptively simple prose is sprinkled with shrewd observations about the emotions that underpin bad or wicked political decisions.”
— Economist

“Albright [has] serious credibility on the subject. She witnessed the evils of Fascism firsthand, as her book movingly chronicles. And she effectively makes the case: pay more attention to the signals, subtle and strong. A lot more.”
— The New Yorker

“Why, as Madeleine Albright asks early in her new book, ‘are we once again talking about fascism?’ Who better to address these questions than Albright, whose life was shaped by fascism and whose contribution to the cultivation of democracy as a stateswoman and private citizen is unparalleled? In Fascism: A Warning Albright (with Bill Woodward) draws on her personal history, government experience and conversations with Georgetown students to assess current dangers and how to deal with them.”
— New York Times

“Fascism [is] the work of a woman who knows authoritarianism when she sees it. And she sees the seeds of it not only in a slew of leaders hell bent on subverting democratic norms—Turkey’s Erdoğan, Venezuela’s Maduro, Hungary’s Orbán, and others—but also in Donald Trump, whom she calls in the book ‘the first antidemocratic president in modern U.S. history.’”
— The Daily Beast

“Albright outlines the warning signs of fascism and offers concrete actions for restoring America’s values and reputation. There is priceless wisdom on every page.”
— Booklist (starred review)