The Owl Always Hunts at Night: A Novel (Paperback) 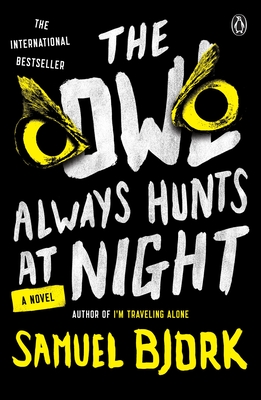 Investigator Holger Munch and his over-the-edge brilliant team find themselves in the middle of a seemingly realistic murder of a teenage girl from a nearby orphanage. Emaciated and naked, Camilla Green is found surrounded by owl feathers and candles, part of a pentagram. This dead end investigation is plagued by many damaged, suspicious souls. Holger's own adult daughter, Miriam, unknowingly, befriends a man who is connected to this crime. Once the guilty emerge, shattered lives are left to uneasily resume normalcy!

When a troubled teenager disappears from an orphanage and is found murdered, her body arranged on a bed of feathers, veteran investigator Holger Munch and his team are called into the case. Star investigator Mia Kruger, on temporary leave while she continues to struggle with her own demons, jumps back on the team and dives headfirst into this case: just in time to decode the clues in a disturbing video of the victim before she was killed, being held prisoner like an animal in a cage.

Meanwhile, Munch’s daughter, Miriam, meets an enticing stranger at a party—a passionate animal rights activist who begins to draw her into his world and away from her family.

Munch, Kruger, and the team must hunt down the killer before he can strike again in this sophisticated, intricately plotted psychological thriller by the newest phenomenon in international crime fiction.

Samuel Bjørk is the pen name of Norwegian novelist, playwright, and singer/songwriter Frode Sander Øien. Øien wrote his first stageplay at the age of twenty-one and has since written two highly acclaimed novels, released six albums, written five plays, and translated Shakespeare, all in his native Norway. Øien is the author of I’m Traveling Alone. He currently lives and works in Oslo.

“Expertly paced and thoughtfully plotted, The Owl Always Hunts at Night will leave you shaken to your core.”
—Bustle

"The tension and stakes increase exponentially over the course of this meticulously plotted tale...Bjork’s character work is excellent and imbues the story with nuance and heft."
—Publisher's Weekly

“A suspenseful, skillfully wrought thriller with the potential for a sequel, this is a thoroughly chilling and an excellent read- alike for Jo Nesbø fans.”
—Booklist, starred review

“A breath of fresh air in the crowded Scandinavian crime genre, this suspenseful novel . . . will hook readers early and keep them on the edge of their seats until the final pages. Fans of Jo Nesbø are sure to enjoy the flawed yet likable characters.”
—Library Journal, starred review

“Samuel Bjørk’s formidable I’m Traveling Alone is despatched with real élan. . . . Mia’s confrontation with both her own demons and a very human one is mesmerising fare.”
—Independent (UK)