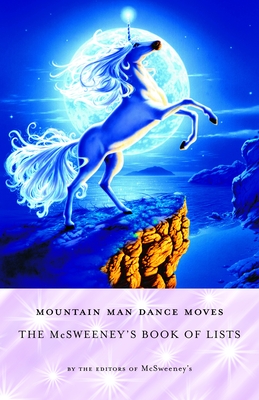 This is not a new book. I fell in love with it several years ago, long before my love affair with McSweeney's ended. But just this weekend I pulled it off my bookshelf and started thumbing through it with some friends. We laughed and laughed well into the early morning. This compilation is filled with witty, inane, and hilarious lists... sometimes the list concept alone will have you rolling on the floor and unable to read it aloud.
Excerpts from the list "Lesser Known Movie Prequels"

If a mountain man felt compelled to dance, how would he do it? If koala bears could talk, what would they say? And what’s the right pickup line, if you’re a necrophiliac? (Maybe “I’m pretty sure I’m not going to get you pregnant.”)

In the throes of debates like these, we’re lucky to have the learned people of McSweeney’s Internet Tendency, America's best low-budget humor website, and their edifying work. From their best-looking writers comes this collection of over three hundred lists, including...
“Signs Your Unicorn Is Cheating on You.”"Errors in Communication Between My Hairdresser and Me, in the Form of What I Said and What He Heard""Things This City Was Built On, Besides Rock 'n' Roll""Things This One Girl Sitting Near Me in a Movie Theater Said Out Loud When One of the Characters Was Shown Pulling Into a Gas Station""Future Winners of the New Yorker Cartoon Caption Contest""Adjectives Rarely Used by Wine Tasters""The Collected Apologies of Lawrence H. Summers, President of Harvard""Exactly What I Mean When I Say My Ex-Girlfriend Kristin and I 'Wanted Different Things from Life’"And much, much more...

McSweeney's is a small group that sells taxidermy equipment and also produces books, a literary quarterly, and The Believer, a monthly review. Based in San Francisco, McSweeney's is also home to 826 Valencia, a nonprofit educational center for Bay Area youth.