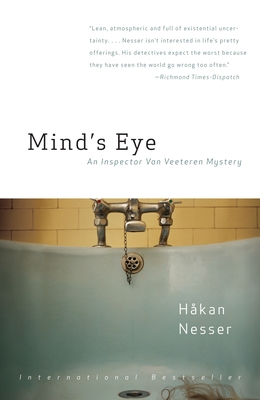 This is book number 1 in the Inspector Van Veeteren Series series.

A Greek tragedy in a Northern European is the case that will forever haunt Inspector Van Veeteren in his first novel, although it is the 3rd to be published in the U.S. Rich in philosophical musings, dry wit and top-rate mysteries, Nesser is at teh forefront of the current Swedish crime invasion.

Håkan Nesser is firmly established as one of the world's bestselling crime novelists. And now the novel that introduced Chief Inspector Van Veeteren is available for the first time in English.

The swift conviction left Van Veeteren uneasy: Janek Mitter woke one morning with a brutal hangover and his wife dead in the bathtub. With only the flimsiest defense, he is found guilty and imprisoned in a mental institution. But when Mitter is murdered in his bed, Van Veeteren regrets not following his gut and launches an investigation into the two murders. As the chief inspector delves deeper, the twisted root of these violent murders will shock even him.

Håkan Nesser was born in 1950 in Sweden. In 1993 he was awarded the Swedish Crime Writers' Academy Prize for new authors for his novel Mind's Eye, and is the only author to have won the Academy's best novel award three times: in 1994 for Borkmann's Point; in 1996 for Woman with Birthmark; and in 2007 for A Rather Different Story. In 1999 he was awarded the Crime Writers of Scandinavia's Glass Key Award for the best crime novel of the year for Carambole. His novels have been published to wide acclaim in twenty-five countries.

“Lean, atmospheric and full of existential uncertainty. . . . Nesser isn't interested in life's pretty offerings. His detectives expect the worst because they have seen the world go wrong too often.” —Richmond Times-Dispatch

“In a class of its own. . . . This stunning novel by one of Sweden's foremost crime writers might have been written as a script for Alfred Hitchcock.” —The Sunday Times (London)

“Mind's Eye satisfies on every level. It is an intelligently written, cleverly plotted tale, populated with believable characters. . . . Nesser was superb right out of the gate.” —BookPage