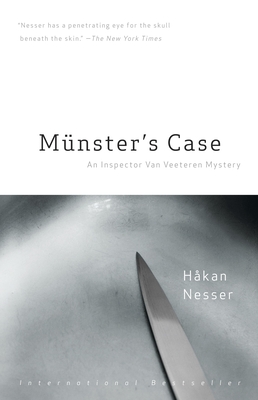 By Hakan Nesser, Laurie Thompson (Translated by)
$16.95
Unavailable at this time.

This is book number 6 in the Inspector Van Veeteren Series series.

The final day of Waldemar Leverkuhn’s life begins auspiciously: With three friends, he wins a modest sum in the lottery. But it ends, after a celebratory dinner, with him belligerent, drunk, and stumbling home to his bed, where he is brutally stabbed to death with a carving knife. The case seems to be going nowhere, until the reserved, weary widow confesses to the killing. When the Leverkuhns’ formidable neighbor goes missing, and then turns up gruesomely murdered, Münster and his team find a few, wispy clues that suggest her death is connected to Leverkuhn’s—clues that lead to a dark and terrible secret.

Håkan Nesser was awarded the 1993 Swedish Crime Writer’s Academy Prize for new authors for Mind’s Eye (published in Sweden as Det Grovmaskiga Nätet); he received the best novel award in 1994 for Borkmann’s Point and in 1996 for Woman with Birthmark. In 1999 he was awarded the Crime Writers of Scandanavia’s Glass Key Award for the best crime novel of the year for Carambole. Nesser lives in Sweden and London.

“Nesser has a penetrating eye for the skull beneath the skin.” —The New York Times

“Nesser’s novels look for the roots of crime in the ills of society. . . . He has seized his chance to create his own dark poetry from these stark materials, and the effect is haunting.” —The Wall Street Journal

“Hakan Nesser’s Swedish detective novel plays like an English parlor mystery, a sort of mental shell game as police sit to interview potential witness after witness, nearly all of whom are suspects until they die themselves.” —Charleston Post & Courier