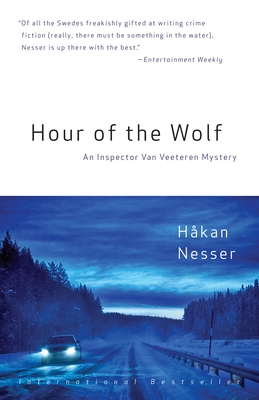 By Hakan Nesser, Laurie Thompson (Translated by)
$16.00
Unavailable at this time.

This is book number 7 in the Inspector Van Veeteren Series series.

A riveting story in show-stopping prose, the latest chapter of this internationally bestselling series is the Nordic noir superstar’s darkest tale yet.

In the middle of a dark, rain-slicked night, a young man is struck and killed by a car. The driver, drunk, abandons the body by the side of the road. Tormented with guilt the next morning, he struggles to put the death out of his mind—until a blackmail note arrives and sets into motion a devastating chain of events.

Reinhart, the new chief inspector of the Maardam police force, initially has few leads. But when the victim of a second, possibly related killing is identified as somebody in his inner circle, Reinhart realizes that this is no ordinary investigation. And as the killer becomes increasingly unhinged, former chief inspector Van Veeteren—a legend now in retirement—is called forth to face the most haunting and difficult case of his life.

HÅKAN NESSER is one of Sweden’s most popular crime writers. He has received many awards for his novels featuring Inspector Van Veeteren, including the European Crime Fiction Star Award, the Swedish Crime Writers’ Academy prize for best crime novel (three times), and Scandinavia’s prestigious Glass Key Award. The Van Veeteren series is published in thirty countries and has sold fifteen million copies worldwide. Nesser lives in Gotland, Sweden, with his wife.

“Of all the Swedes freakishly gifted at writing crime fiction (really, there must be something in the water), Nesser is up there with the best.” —Entertainment Weekly

“The pleasures of Hour of the Wolf have as much to do with the philosophical musings of the cops as the increasingly twisted first-person narration of their prey.” —Chicago Tribune

“Nesser’s novels look for the roots of crime in the ills of society.  . . . He has seized his chance to create his own dark poetry from these stark materials, and the effect is haunting.” —The Wall Street Journal

“Nesser is a master of suspense.” —The Sunday Times (London)

“[Holds] readers’ attention in an unbreakable grip. . . . There is not a single misstep.” —
The Independent  (London)

“Håkan Nesser’s Hour of the Wolf will have you howling with pleasure.” —Evening Standard (London)

“Magnificent. . . . Like Kate Atkinson, Nesser draws believable lines between crimes in this series’ sixth tale, linking them with a trail of psychological crumbs and adding a bit of heart to the series’ moody atmosphere and cerebral thrills.”  —Booklist

“No frills, no subplots, no unnecessary moving parts: an autumnal procedural that illustrates what superior results you can get by stripping away the extras.” —Kirkus Reviews

“Intelligent and appealing . . . . Like all the Van Veeteren novels, [Hour of the Wolf] was worth the wait.” —Bookpage