It's a Slippery Slope (Paperback) 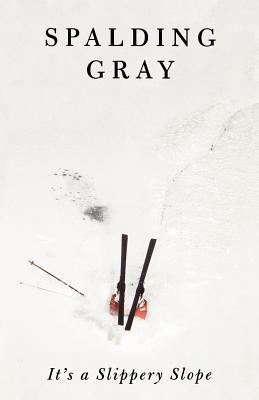 His performances are the stuff of legend, his tireless effort to get to the root of the self a thing of unparalleled beauty. Here, a late-onset, inexplicable obsession with skiing is used as a jumping-off point to shake out the pockets of a mid-life crisis. Gray was genuinely a national treasure and his trademark precision and sophistication are sublimely realized here.

Within a year, the familiar boundaries of Spalding Gray's existence have been altered by betrayal, love, lust and loss. He suddenly marries his longtime companion, and divorces her just as quickly; he moves in with his girlfriend, Kathie, who bears him a son; and he learns, against all odds, to ski. But not even his mastery of the much-feared right turn can prepare him for the exhilarating experience of fatherhood. A brilliant improvisation with as many twists and turns as a double-diamond course, It's a Slippery Slope explores how one man survives a mid-life crisis by finding his balance on skis.

Writer and actor Spalding Gray was best known for writing and starring in autobiographical monologues like Swimming to Cambodia, Monster in a Box, and It’s a Slippery Slope where he humorously integrated his anxieties and experiences into stage performances. He was a co-founder of the Wooster Theatre Group in New York City and also appeared in films such as The Killing Field and Kate & Leopold.

“The grand master of the first-person singular ... Skiing is definitely a Gray area.” —Peter Marks, The New York Times

“Spalding Gray may be the nation's most outstanding storyteller. Nothing eludes his eye or the sureness of his satire. The secret of his success is the skewed angle of vision--his eccentric wit and ruthless candor.” —Los Angeles Times