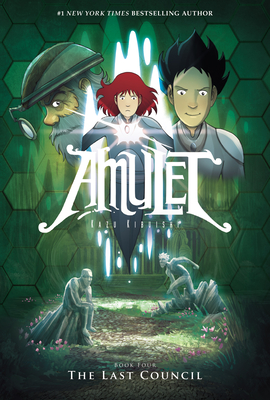 This is book number 4 in the Amulet series.

Emily and her friends think they'll find the help they need in Cielis, but something isn't right. Streets that were once busy are deserted, and the townspeople who are left live in fear. Emily is escorted to the Academy, where she's expected to compete for a spot on the Guardian Council, a group of the most powerful Stonekeepers. But as the number of competitors gets smaller and smaller, an awful secret is slowly uncovered -- a secret that, if left buried, means the certain destruction of everything Emily fights for.