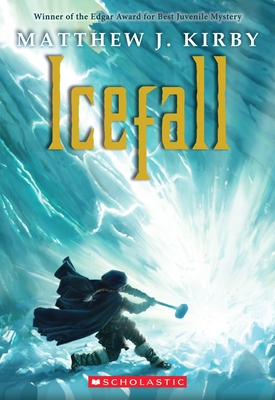 Soveig is not your typical heroine. She is plain and forgotten, trapped with her siblings on a frozen fiord. Her strength, bravery, and compassion have made her one of my favorite characters, ever. This story is full of courage, and small kindnesses that help you believe in the goodness of people. With lots of action, suspense, and amazing Norse myths retold through Solveig's eyes this is a book to savor and an author to watch.

Trapped in a hidden fortress tucked between towering mountains and a frozen sea, Solveig--along with her brother the crown prince, their older sister, and an army of restless warriors--anxiously awaits news of her father's victory at battle. But as winter stretches on, and the unending ice refuses to break, terrible acts of treachery soon make it clear that a traitor lurks in their midst. Solveig must also embark on a journey to find her own path. Yet, a malevolent air begins to seep through the fortress walls, as a smothering claustrophobia slowly turns these prisoners of winter against one another.

Those charged with protecting the king's children are all suspect, and the siblings must choose their allies wisely. But who can be trusted so far from their father's watchful eye? Can Solveig survive the long winter months and expose the traitor before he manages to destroy a kingdom?

Matthew J. Kirby is the critically acclaimed author of the middle-grade novels Icefall, which won the Edgar Award for Best Juvenile Mystery and the PEN Literary Award for Children's Literature; The Clockwork Three, which was named a Publishers Weekly Flying Start; The Lost Kingdom; Last Descendants, an Assassin's Creed novel; The Quantum League: Spell Robbers; and Cave of Wonders, the fifth book in the Infinity Ring series. He was born in Utah and grew up in Maryland, California, and Hawaii. Matthew is currently at work on his next novel.

"[A] taut, compelling mystery and survival story . . . Readers will be left thinking about this one long after the chill has left their bones." -- Bulletin of the Center for Children's Books

"[A] superb mystery enriched with powerful, believable characters, plot, and setting, and guarantees that readers will be thoroughly engaged to the final word." -- Books to Borrow, Books to Buy, Nationally Syndicated Column


Praise for The Clockwork Three:

* "In this riveting historical fantasy . . . debut novelist Kirby has assembled all the ingredients for a rousing adventure, which he delivers with rich, transporting prose. Mixing fantasy and steampunk elements with subtle urban mythology, Kirby's immersive story can be read as a modern morality play or a satisfying stand-alone tale." -- Publishers Weekly, starred review