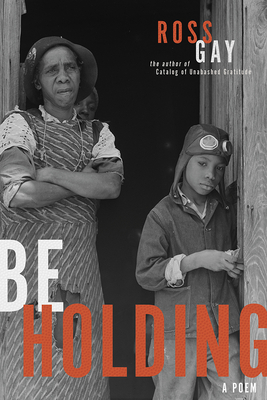 This book begins as a dedicated ode to Dr. J (Julius Erving, a basketball great). However, in a fashion that is now recognizable to most of Gay's readers, the poem flows and expands, seeping into disparate ideas and gathering them together gently. It follows the motions of Dr. J's famous move in a kind of soaring flight,  one sweeping sentence instead of one leap. Ross Gay never disappoints.

Winner, 2021 PEN/Jean Stein AwardWinner, 2022 Indiana Author Award in Poetry
Be Holding is a love song to legendary basketball player Julius Erving—known as Dr. J—who dominated courts in the 1970s and ‘80s as a small forward for the Philadelphia ‘76ers. But this book-length poem is more than just an ode to a magnificent athlete. Through a kind of lyric research, or lyric meditation, Ross Gay connects Dr. J’s famously impossible move from the 1980 NBA Finals against the Los Angeles Lakers to pick-up basketball and the flying Igbo and the Middle Passage, to photography and surveillance and state violence, to music and personal histories of flight and familial love. Be Holding wonders how the imagination, or how our looking, might make us, or bring us, closer to each other. How our looking might make us reach for each other. And might make us be reaching for each other. And how that reaching might be something like joy.

Ross Gay teaches poetry at Indiana University and is the author of the poetry collections Against Which, Bringing the Shovel Down, Lace and Pyrite: Letters from Two Gardens (with Aimee Nezhukumatathil), River (with Rose Wehrenberg), Catalog of Unabashed Gratitude, and the essay collection The Book of Delights.

“The brilliant fourth book from Gay . . . continues his now-signature inquiry into feeling. Shaped as a single poem in a long sentence of center-justified couplets, the drama of this unfolding sentence is impeccable, a suspension that mirrors its subject: basketball Hall-of-Famer Julius Erving’s midair ‘baseline scoop’ in the 1980 NBA finals.” —Publishers Weekly starred review


“This book-length poem is a voice’s drive down center court. At once record, collage, group photograph, dance, and archive, Be Holding reveals a multifaceted intimacy and lyricism within the history of a game, tracing how this history is interconnected with the saga of our country. Ross Gay has once again proven himself one of our greatest poets.” —Claudia Rankine

“Nothing happens only when it happens. Right now, we’re all tree-borne watching the Doctor all but not come down, again and again. We feel the weight of our enjoyment, the heavy duress we’re under when it happens, where it happens, where nothing happens only where it happens. Behold! We are held in flight. Is that why Dr. J tried to give the last word on that move, saying it was ‘just another move,’ saying so all but sadly? Well, Be Holding unfolds that word, moves it and releases it, re-releasing that move in carefully watching, again and again, for all that differentiates it from all the descendant moves and for all that entangles it with all the ascendant ones. The flights in fallenness, the grave plays on stillness, the refusals of space and time, the reprovals of being and history, are so serious that it’s as if it were just a game, not a game, not a game, this practice of desperate falling into looking. We play it light, though. There’s no last word on what we hand and hold, or on what we behold, or on our beholding. Again and again, in the beautiful note he holds and hands, that’s what Ross Gay be saying.” —Fred Moten

"There are no idle spectators in this new bougainvillea book-length poem by Ross Gay. Tender, incisive, double-dutching couplets, stretch end to end. We are hula-hooped on and off the court then deposited inside photographs and lush gardens, calipers in hand, ready to measure the honey, the scent, the circumference of our eyes, hearts, hand." —Nikky Finney

“My Lord. The brilliance, formal dexterity, and deep generosity of this book. This book that makes me rethink what poetry can offer, both in a literary and holistic sense. Ross Gay takes one fluid human gesture and through it expands the lungs of personal and communal history so they might hold all joy, terror, and violence of this world. Be Holding is unlike any poetry book written in recent memory. In this terrible era, Ross Gay has written a book that breathes this broken world in and then returns it to us so we might breathe too. And break. And bloom into whatever it is we are on the path to becoming.” —Gabrielle Calvocoressi

“A unique work of form and substance.” —The Millions


“Impossible, unprecedented, right-before-your eyes but defying logic and the laws of nature.” —RHINO

“Ross Gay’s work is not only celebratory. It is also an exegesis on loss, grief, prejudice, shame, and the improbability of grace in our lives—especially in Black lives.” —Boston Review