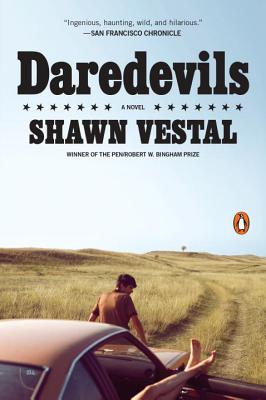 By Shawn Vestal
$16.00
On our shelves now at one or more of our stores

“We believed, America.” Thus, the voice of Evel Kneivel – or, at least, some infalliable, omniscient version of him – begins Daredevils. It's 1974 in Gooding, Idaho, and two teenage kids - both from Mormon families but in starkly different situations - are about to put their faith in earthly saviors, dangerous heroes and, ultimately, each other. Which means, of course, that they are about to learn how heroes can disappoint us, how saviors turn out to be just as bad as the things they save you from, and how incredibly hard and lonely it is to be free. But they're also about to learn that in the end, we've all got to believe in something. Daredevils won the 2017 Washington State Book Award for Fiction. — From Sam

“Gooding, Idaho, 1975: Loretta, Jason, and Boyd, three teenagers each trapped in their own way, find each other and plot their escape. Vestal lays out the history and complexity of their lives and their Mormon community, from Loretta's becoming an unwilling 'sister wife' in a zealous household to Jason's struggle to identify himself while at odds with his family and hometown. Surreal interludes of 'Evel Knievel Addresses an Adoring Nation' showcasing the fevered stunt driver waxing poetic, demonstrate Vestal's strength with language as a reeling Knievel appears like a vision of cowboy extremism, becoming the off-kilter savior the teenagers have been seeking.”
— Julia Sinn (E), Bookshop Santa Cruz, Santa Cruz, CA

From the winner of 2014’s PEN Robert W. Bingham Prize, an unforgettable debut novel about Loretta, a teenager married off as a “sister wife,” who makes a break for freedom

At the heart of this exciting debut novel, set in Arizona and Idaho in the mid-1970s, is fifteen-year-old Loretta, who slips out of her bedroom every evening to meet her so-called gentile boyfriend. Her strict Mormon parents catch her returning one night, and promptly marry her off to Dean Harder, a devout yet materialistic fundamentalist who already has a wife and a brood of kids. The Harders relocate to his native Idaho, where Dean’s teenage nephew Jason falls hard for Loretta. A Zeppelin and Tolkien fan, Jason worships Evel Knievel and longs to leave his close-minded community. He and Loretta make a break for it. They drive all night, stay in hotels, and relish their dizzying burst of teenage freedom as they seek to recover Dean’s cache of “Mormon gold.” But someone Loretta left behind is on their trail...

A riveting story of desire and escape, Daredevils boasts memorable set pieces and a rich cast of secondary characters. There’s Dean’s other wife, Ruth, who as a child in the 1950s was separated from her parents during the notorious Short Creek raid, when federal agents descended on a Mormon fundamentalist community. There’s Jason’s best friend, Boyd, part Native American and caught up in the activist spirit of the time, who comes along for the ride, with disastrous results. And Vestal’s ultimate creation is a superbly sleazy chatterbox—a man who might or might not be Evel Knievel himself—who works his charms on Loretta at a casino in Elko, Nevada.

A lifelong journalist whose Spokesman column is a fixture in Spokane, WA, Shawn has honed his fiction over many years, publishing in journals like McSweeney's and Tin House. His stunning first collection, Godforsaken Idaho, burrowed into history as it engaged with masculinity and crime, faith and apostasy, and the West that he knows so well. Daredevils shows what he can do on a broader canvas--a fascinating, wide-angle portrait of a time and place that's both a classic coming of age tale and a plunge into the myths of America, sacred and profane.

Shawn Vestal made his literary debut with Godforsaken Idaho, a story collection that won the 2014 PEN Robert W. Bingham Prize and was shortlisted for the Saroyan Prize. A graduate of the Eastern Washington University MFA program, his stories have appeared in Tin House, Ecotone, McSweeney's, The Southern Review and other journals. He writes a column for The Spokesman-Review in Spokane, Washington, where he lives with his wife and son.

“Powerful…breathtaking and brash…[Vestal] makes his entrance as if he were already a seasoned pro, writing at full throttle and with relaxed control, showing thorough knowledge of his terrain and a sure instinct for where he wants to go…His evocation of Loretta’s mind-set shows astonishing perception…He captures Loretta’s protean quality so well that it may disconcert some readers who are not used to seeing the young female psyche so unhypocritically laid bare…Vestal sends his characters soaring across the gulf that separates the identity that confines them and the identity they would choose, letting them land roughly but firmly on the other side, broken but free.”—Liesl Schillinger, Barnes & Noble Review

“A coming-of-age story, as bone-crunching as Knievel’s crash at Vegas’ Caesar’s Palace or England’s Wembley Stadium…scented with the sagebrush and dairy farms of high  desert America; riven with the tenacious, arid religion of a particularly American kind…[a] wild, epic, noir-ish tale…How Shawn Vestal in Daredevils navigates his charges through such a determined promised land as that is the stuff of one of the most propulsive, deeply interrogative novels of late.”—15 Bytes

“Remarkable…[Vestal] presses into service a gifted eye for observation…It’s a bravura passage in a novel brimming with them, runs of word-perfect sentences that burn themselves into your memory as if with a soldering iron. A little hard to believe, sometimes, that Vestal is a writer just out of the gate, but mostly it’s just exciting to watch such a talent unspool itself… Vestal’s prose is wonderfully measured and cadenced throughout, with an unforced lyricism that knows just when to take flight.” — LA Review of Books

“Riveting…Loretta is a complex and compelling character…Adolescence anywhere traverses a rocky, chaotic landscape. Vestal gives readers an intimate and revealing look at growing up within the constrictions of an overbearing religious sect… As with his earlier short stories, Vestal’s characters are superbly drawn in this compelling novel…Vestal has launched a thrilling motorcycle leap of his own, bold, fast-paced and seemingly headed for oblivion. Readers are advised to hang on for a wild and rewarding ride.”—Seattle Times

“Starts off like a bolt of lightning and doesn’t let up…The prose in "Daredevils" is light and fast-moving, never weighty…Paragraphs leap over and upon themselves, one idea spinning into the next. It is, quite simply, a truly good read, immediately and consistently absorbing…[Loretta’s] story is a timeless one.”—Christian Science Monitor

“Elegant…At its core, Daredevils is about the opposing forces at play in the American West. On the one hand, we have the wild freedom epitomized by Evel Knievel, whose voice punctuates the narrative, exhorting the younger characters to risk everything. Running counter to this is the strict discipline of the Mormon faith, which allowed Brigham Young and his followers to build a community in an inhospitable wilderness. The teenage protagonists of Daredevils are just beginning to confront the difficult balance between the two that maturity requires…Vestal...is a fine stylist. There’s not a clunky sentence in this book.”  —Washington Post


“[A] full-throttle, exhilarating debut novel about faith, daring and the unexpectedly glorious coming-of-age of a Mormon teenager…This on-the-road novel takes twists and turns that are on no literary map you’ve ever seen…Vestal plays with points of view at a dizzying speed, so that at times the novel feels like a symphonic chorus…The writing, too, feels revolutionary in how it startles you…Ingenious, haunting, wild and hilarious.”—San Francisco Chronicle

“[A] magnificent debut of youthful yearning…Armed with life skills gleaned from the Bible, the Book of Mormon, and Knievel himself—who makes cameo appearances—Loretta, Jason, and a friend, doggedly making one bad decision after another, embark on a wild ride to meet their destiny. And what a glorious journey it is.” —Donna Chavez, Booklist (starred review)

“Vibrant, compelling…The book is stocked with vivid characters, such as Jason’s best friend, Boyd, and Evel Knievel himself. Vestal has created a riveting, rollicking thrill ride about throwing caution to the wind.”—Publishers Weekly

“The 1970s, that most unjustly derided of decades, is evoked with intimate detail in this coming-of-age story set in an American West that is expansive with possibility yet constrained in imagination. Vestal, who established a reputation for depicting this physical and psychic terrain in his short-story collection, Godforsaken Idaho (2013), intersperses these incidents with funny, persuasively rendered monologues by Evel Knievel himself, speaking throughout as the wounded, embittered, and caustically eternal voice of anyone whose yearning to defy his or her own fate is thwarted as much by his or her own hubris as by fate itself. This debut novel captures the flailings and flights of hapless dreamers with prose that throbs like the strings of an electric bass playing its sad heart out in a near-desolate landscape.”—Kirkus Reviews, starred

"Daring, moving, and tender…. Vestal writes as clearly as a trail leading West, the words leaving impressions like wagon ruts. Beautiful and at times heartbreaking, this book will knock you out.”- Nina McConigley, author of Cowboys and East Indians

“Shawn Vestal’s seductive Daredevils is part American Dream and part American Gothic. Gold, lust, cults, polygamy, broken bones, broken hearts, and the yearning for a possibly fatal freedom drive this book, which shares a few features with its character of Evel Knievel: it is lean, fierce, and dangerous. Read it with care.” —Viet Thanh Nguyen, Pulitzer Prize winning author of The Sympathizer

"Shawn Vestal’s Daredevils busts open any expectations of a coming-of-age novel and transforms it into something fresh, vital and wild. And with Loretta, he has given us one of the most moving young protagonists in recent memory. Few writers have captured the hard, radiant edges of adolescent transformation, nor wielded popular culture to such precise and potent effect. Don’t miss this stunner of a debut."-Megan Abbott, author of The Fever and Dare Me

"Relentlessly enjoyable, surprising, inventive, and just plain heartwarming…Daredevils is a bona fide marvel that pairs two American originals: the complex human drama of Mormonism and the bigger-than-life bravura of 1970s icon Evel Knievel. What takes more courage – a motorized leap across a canyon or a young girl's first few steps toward independence and a life on her own terms? I couldn't put it down as I cheered on Loretta until the very last page. A real wonder."-Scott Cheshire, author of High as the Horses’ Bridles

“A speeding stunt bike of a novel, propulsive and daring. Vestal's prose feels born of the southern Idaho landscape, as fleet and muscular as the jackrabbits swarming the desert floor…The characters' desires and aches—for love, for glory, for freedom—strain within their confines and burst off of the page. A lucid, bright gem.”- Sharma Shields, author of The Sasquatch Hunter's Almanac


From the Hardcover edition.