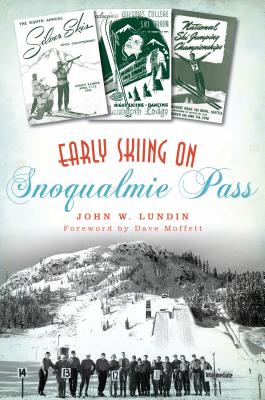 Relive the exciting early days of skiing when Snoqualmie Pass was the epicenter of the sport. Ski jumping tournaments attracted world-class competitors to Cle Elum, Beaver Lake on the Summit and the Milwaukee Ski Bowl. The Mountaineers' twenty-mile race from Snoqualmie to Stampede Pass, dubbed "the world's longest and hardest race," was a pinnacle of cross-country skiing. Alpine skiing began in private ski clubs and expanded in 1934 with the country's first municipal ski area, known as the Seattle Municipal Ski Park. And the sport peaked when the Milwaukee Ski Bowl at Hyak opened in 1938. With train access, a modern ski lodge, an overhead cable lift and free ski lessons from the Seattle Times, the Ski Bowl revolutionized local skiing. Lawyer and local ski historian John W. Lundin follows the historic tracks through the genesis of American skiing.

John W. Lundin is a Seattle lawyer who learned to ski on Snoqualmie Pass using wooden skis, leather boots and cable bindings and riding rope tows. He was a member of Sahalie Ski Club, which began on Snoqualmie Pass in 1931, and has homes in Seattle and Sun Valley, Idaho. His mother, Margaret Odell Lundin, learned to ski on Mount Rainier and Snoqualmie Pass in the 1930s, was faculty advisor to Seattle's Queen Anne High School Ski Club from 1938 to 1941 and took her students on the ski train to the Milwaukee Ski Bowl at Hyak for free ski lessons courtesy of the Seattle Times. Lundin has written extensively about early skiing in Washington and the history of the Wood River Valley in Idaho, where his great-grandparents settled in 1881. He is a frequent lecturer on history topics in both states and is currently writing several other history books.