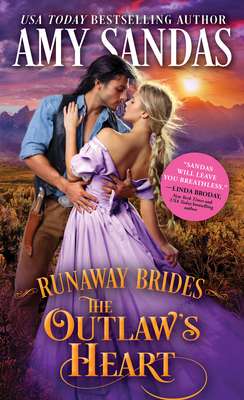 This is book number 3 in the Runaway Brides series.

This runaway bride, second-chance-at-love romance was unexpected and totally swoonworthy. The narrative builds steadily until the final chapters when all hell breaks loose and the story peaks in classic Western fashion. If you like character-driven stories, here's all you need to know: there's a contemplative Native American hero, a Boston society wife with a spine of steel, an abusive bastard of a wealthy husband, and a band of misfit outlaws hidden in a valley of the idyllic Rocky Mountains. Great fun as a standalone or to read out of series order.

Three runaway brides determined to escape their fates flee West to find freedom that can only be had in a cowboy's arms.

Desperate to escape an unhappy marriage, Boston socialite Evelyn Perkins flees west in hopes of losing herself to the dusty frontier. But when her train is boarded by outlaws, Evelyn is taken for ransom. Despite her terror, Evelyn fears being returned to her husband more. Refusing to co-operate, she becomes the responsibility of a man whose steady gaze threatens to pierce her brave façade and reach the wounded heart within.

Gabriel Sloan has his orders, but the haunting shadows in the pretty young woman's eyes spark an intense protective instinct he can't deny. Every look, every touch brings them closer together. He would do anything to protect her, but dangerous men are on their trail, and soon the two must face Evelyn's darkest nightmare—or risk losing the unexpected joy they've found forever…

"Pure perfection."—Romancing the Book for The Untouchable Earl

"Smart and Sexy."—Booklist for Luck is No Lady

Amy Sandas writes historical romance about dashing and sometimes dangerous men and women who are often reckless, bold, and unconventional. Her affinity for writing began with sappy pre-teen poems and led to a Bachelor's degree with an emphasis on Creative Writing from the University of Minnesota-Twin Cities. She lives with her husband and children in Wisconsin.

"Fans of historicals will devour this suspenseful romance, and series fans will be sorry to see the trilogy end." — Publishers Weekly

"The author did a great job developing the characters and making the readers feel all the character’s emotions. I am so glad I discovered this author and plan on reading the rest of the series and her other books." — Harlequin Junkie, Top Pick