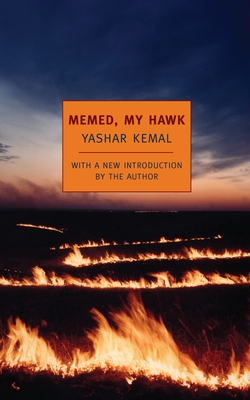 By Yashar Kemal, Yashar Kemal (Introduction by), Edouard Roditi (Translated by)
$16.95
Out of stock, usually available in 1-5 days

A tale of high adventure and lyrical celebration, tenderness and violence, generosity and ruthlessness, Memed, My Hawk is the defining achievement of one of the greatest and most beloved of living writers, Yashar Kemal. It is reissued here with a new introduction by the author on the fiftieth anniversary of its first publication.

Memed, a high-spirited, kindhearted boy, grows up in a desperately poor mountain village whose inhabitants are kept in virtual slavery by the local landlord. Determined to escape from the life of toil and humiliation to which he has been born, he flees but is caught, tortured, and nearly killed. When at last he does get away, it is to set up as a roving brigand, celebrated in song, who could be a liberator to his people—unless, like the thistles that cover the mountain slopes of his native region, his character has taken an irremediably harsh and unforgiving form.

Yashar Kemal (1922–2015) was born into a Kurdish family in a village in southern Anatolia and saw his father brutally murdered at the age of five, which left him with a severe stutter for years to come. He received his basic education in village schools before working as a farmer, factory worker, public letter-writer, and journalist. Memed, My Hawk, his first novel, was published in 1955 and won the Varlik Prize for best novel of the year. Kemal’s numerous other books include The Wind from the Plain trilogy, Salman the Solitary, Seagull, and four books recounting the exploits of Memed, including, Memed, My Hawk and They Burn the Thistles.

Edouard Roditi (1910-1992) was born in France. He was an author of poetry and stories, as well as a translator of writings originating in French, German, Spanish, and Turkish.

"Some books are so famous they need no introduction. But have you ever read Yashar Kemal? His first novel, Memed, My Hawk (NYRB Classics), set in the south-east of Turkey and about a young man at war with feudal authority, was published in the 1950s and brought him international fame. It is still greatly loved in Turkey, and with good reason." --The Guardian

“Yashar Kemal is one of those writers who is content with the patch of earth allotted by birth. As in the case of Faulkner, Akhmatova, or even Joyce, all the events described circle around the site of an early injury. These writers evoke landscapes containing people who, however lost they may be in their marginal existences, fix their gaze upon the center of the world and take up residence there. [Kemal is driven to] write against the age and to tell those stories that have not been elevated to the status of affairs of state because they deal with people who never sat on high, who did not dominate but rather were themselves dominated.”—Günter Grass

“Yashar Kemal is a thousand kilometres tall and can make a story of two stones tender and spellbinding. A master.”—John Berger

“A beautiful and passionate book . . . in the tradition which gave us Dr Zhivago and The Leopard.” —Glasgow Herald

“A tale that assumes epic proportions and gathers speed to rush to a spectacular climax.” -- Daily Telegraph

"A beautiful novel in the old, glorious tradition of heroic storytelling." —Scotsman

"Follows in that tradition of strong, simple novels about the life of the peasantry. It has that insider's feeling for man, the oppressed, labouring animal . . . you might find in Tolstoy, Hardy or Silone. The author never loses his freshness, an ability to pick on details as though seen for the first time." —Guardian

"Yashar Kemal achieves the Russian quality — an intimacy of detail which makes his etching indelible, more selected, and therefore more obvious than life . . . The book is a small, sharp, moving epic of the Turkish soil." —Sunday Telegraph

“A remarkable novel, reminiscent of Hardy in its power and scope.” —Queen

“The sense of heroism, the animal tenderness, the marvelous feeling for the land, and the intuitive narrative rythm give the book raw vitality and pure immediacy.” -- Saturday Review

“A folk hero worthy to rank with Robin Hood.” -- The New York Times

“Here again is that directness and that fierce poetry which one knew in the old heroic stories, and a hero in whom one can have such faith and trust that one can bear to read his torments knowing that he is strong enough to endure them. It is a beautiful and passionate book. It has been ably translated, and it is well in the Harvill tradition which gave us Dr Zhivago and The Leopard.” --- Glasgow Herald