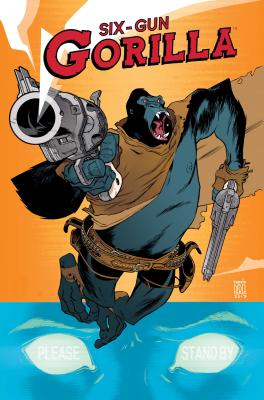 Welcome to the Blister. Where your hero is an ex-librarian, his partner is a gun-toting bio-engineered gorilla, and the laws of physics take a back-seat to surreal storytelling.

Lost in a lawless, post-apocalyptic other-world. Good thing your companion is a...Six-Gun Gorilla Welcome to "the Blister" -- a bizarre other-world colonized by humans sometime in the 22nd century, which quickly became a hotly-contested source of fertile land and natural resources long ago exhausted on Earth. In this new frontier, a rogue gunslinger and his companion wander across a wilderness in the grips of a civil war, encountering lawlessness, natives, and perversions of civilization in a world at the crossroads between the past and the future. The fact that said gunslinger is a bio-surgically modified silverback gorilla toting a pair of enormous revolvers is neither here nor there. Written by Simon Spurrier (Marvel's X-MEN LEGACY, CROSSED WISH YOU WHERE HERE), drawn by hot new talent Jeff Stokely (FRAGGLE ROCK, THE REASON FOR DRAGONS), and featuring a cover by Eisner Award-winning artist Ram n P rez (A TALE OF SAND, WOLVERINE & THE X-MEN), SIX-GUN GORILLA is a pulpy mash-up of Western weirdness and lo-fi science fiction unlike anything else.

Simon Spurrier is a British comic writer who began his career in comics with 2000 AD and Warhammer Monthly. He broke into the US comic market with his original series, Gutsville, published by Image Comics with artist Frazer Irving. He's worked widely for American publishers including Marvel Comics, Dark Horse Comics, and Avatar Press. He penned the superhero deconstruction series, Extermination, at BOOM! Studios. Jeff Stokely is an American illustrator and comic artist who has worked for Tokyopop and Udon along with doing character design for Mattel, Cryptozoic, and Square Enix. He illustrated the original graphic novel, Reason for Dragons, from BOOM! Studios' imprint Archaia Entertainment.