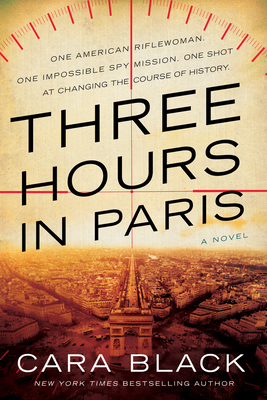 This is book number 1 in the A Kate Rees WWII Novel series.

Cara Black has entertained us for over twenty years with her series featuring Aimee Ledue, a young, stylish PI who knows 1990's Paris inside and out. Who better to write a World War II thriller set in Paris starring young American widow Kate Rees who has been selected by the British and trained as a sniper with one goal: to assassinate Hitler on his brief, 3 hour stop in Paris.

If you love mysteries but also enjoy The Nightingale or The Alice Network, Cara Black has written a book for you!

“I couldn’t put down this well-written and fast-paced thriller. This is the story of Kate Rees, an American female spy, and her tragedies and triumphs during WWII. Cara creates a captivating story around Hitler’s three-hour visit to Paris, to which he never returned again, and takes you on a wild ride through the city that day. Each piece of the timeline is expertly stitched together, and I found myself completely involved! Cara Black, you have a new fan!”
— Lisa Valentino, Ink Fish Books, Warren, RI

In June of 1940, when Paris fell to the Nazis, Hitler spent a total of three hours in the City of Light—abruptly leaving, never to return. To this day, no one knows why.

Kate Rees, a young American markswoman, has been recruited by British intelligence to drop into Paris with a dangerous assignment: assassinate the Führer. Wrecked by grief after a Luftwaffe bombing killed her husband and infant daughter, she is armed with a rifle, a vendetta, and a fierce resolve. But other than rushed and rudimentary instruction, she has no formal spy training. Thrust into the red-hot center of the war, a country girl from rural Oregon finds herself holding the fate of the world in her hands. When Kate misses her mark and the plan unravels, Kate is on the run for her life—all the time wrestling with the suspicion that the whole operation was a set-up.

New York Times bestselling author Cara Black is at her best as she brings Occupation-era France to vivid life in this masterful, pulse-pounding story about one young woman with the temerity—and drive—to take on Hitler himself.

Cara Black is the author of nineteen books in the New York Times bestselling Aimée Leduc series. She has received multiple nominations for the Anthony and Macavity Awards, and her books have been translated into German, Norwegian, Japanese, French, Spanish, Italian, and Hebrew. She lives in San Francisco with her husband and son and visits Paris frequently.

Praise for Three Hours in Paris

“Heart-racing . . . Three Hours in Paris isn’t just any old formulaic 'Get out!' tale. It’s mystery master Cara Black’s first standalone novel, a spy story set during World War II in Occupied Paris. The premise is that an American female sharpshooter is parachuted into France to assassinate Adolf Hitler. Of course, she fails. Using wits alone, she must evade the Gestapo and make it back across the English Channel. Chances of success? Slim to none. Chances that you’ll be able to put Black’s thriller down once you’ve picked it up? Also slim to none.”
—Maureen Corrigan, The Washington Post

“Beyond Black’s encyclopedic knowledge of Paris, her deft interweaving of WWII history and spycraft with a relatable female protagonist puts Three Hours in Paris on par with other top thrillers about botched missions followed by harrowing escapes—such masterworks as Frederick Forsyth’s The Day of the Jackal, Jack Higgins’ The Eagle Has Landed and Tom Clancy’s Patriot Games.”
—Paula Woods, The Los Angeles Times

“Ms. Black (also the author of a long-running series of detective novels featuring Parisian investigator Aimée Leduc) excels at setting vivid scenes, creating lively characters and maintaining pulse-elevating suspense. Three Hours in Paris, with its timetable structure and its hunt for a covert operative, recalls such comparable works as Frederick Forsyth’s The Day of the Jackal and Ken Follett’s Eye of the Needle.”
—Tom Nolan, The Wall Street Journal

“As the author of 19 murder mysteries set in Paris, Black knows the city’s hidden squares and winding alleys. The wartime city and its grim undercurrent of fear are evocatively portrayed . . . Three Hours in Paris is reminiscent of Alan Furst at his best.”
—Financial Times

“An evocative depiction of wartime Paris and a lead you can’t help rooting for . . . If you’re seeking old-fashioned escapism, this has it in spades.”
—The Times (UK)

“In Three Hours in Paris, Cara Black brings her masterful knowledge of the city and its people to the Second World War and an imagined failed attempt on the life of Adolf Hitler by a female American sniper that leaves her fate and that of the war effort very much hanging in the balance. The result is a taut, smart, heart-in-throat page-turner worthy of the most discerning reader of John le Carré, Daniel Silva or Alan Furst—brava!”
—Pam Jenoff, New York Times bestselling author of The Lost Girls of Paris

“Breathtaking! I found it hard to breathe from the first page. A worthy successor to The Day of the Jackal and Six Days of the Condor, but with the addition of a real and likable heroine. This thriller takes Cara Black to a whole new level.”
—Rhys Bowen, New York Times bestselling author of The Tuscan Child, In Farleigh Field and the Royal Spyness series

“I couldn’t stop reading Cara Black’s newest! A young American markswoman named Kate Reese is sent to Paris to assassinate Hitler—what could possibly go wrong? Everything, as it turns out, prompting an intense cat-and-mouse chase through the blacked-out City of Light. Nothing is as it seems, certainly not for Kate, as she tries to escape and make it back to Britain with plans of the secret of the Nazi invasion. Black keeps you guessing—and biting your nails—up to the very last page.”
—Susan Elia MacNeal, author of the New York Times–bestselling Maggie Hope series

"[Three Hours in Paris] is both a stunning and brilliant work of imagination, and a tour de force of rigorous research . . . Fraught with tension and suspense."
—Bonjour Paris

“A high-octane read that will thrill crime fans from start to finish.”
—My French Country Home Magazine

“This stand-alone, with its resourceful, all-American heroine and breathless pace, allows [Black] to flex a different muscle, aided by her deep knowledge of and affinity for all things French . . . A superior thriller with much to offer fans of World War II spy fiction drawn to intriguing what-if scenarios.”
—Air Mail

“Riveting . . . Fans of The Day of the Jackal won't want to miss this heart-stopping thriller.”
—Publishers Weekly

“A riveting game of cat and mouse . . . From the map of Paris on the endpieces of the book to the very last page, I found myself rooting for Kate Rees.”
—Kittling Books

“There is a serious problem with Cara Black’s new stand-alone novel—you won’t be able to sleep once you start reading it! A beautifully written fast-paced thriller with a depth of knowledge about tough American mamas and WWII Paris. Stunning.”
—Liz Newstat, Chevalier’s Books (Los Angeles, CA)

“Based on nothing more than the title, Three Hours in Paris was not the book I expected! In part, that's because this is a real departure for Cara Black. This is not Aimée Leduc's France. The story is an exquisitely tense cat-and-mouse chase between and American operative and a Nazi officer in the dark days of WWII. Vive la difference! This one is a must-read!”
—Susan Tunis, Bookshop West Portal (San Francisco, CA)

“Few know the streets of Paris as well as Cara Black, and no one is as good at bringing a suspenseful thriller to life in the twists and turns of their back alleys and memorable sites. With smart complex characters, fascinating historical details, and a propulsive story that doesn’t disappoint Three Hours in Paris is a literary thrill ride that shouldn’t be missed.”
—Luisa Smith, Book Passage (Bay Area, CA)

“I just loved this. It ratchets up very quickly and never lets go—a high stakes cat and mouse tour through the heart of Paris that features constant danger around every turn for the protagonist, from several sources not the least of which is a sadistic Nazi officer. This is the very best kind of thriller whereby using one’s wits is the only way forward. A big thumb’s up!”
—Sheryl Cotleur, Copperfield’s Books (Sebastopol, CA)

“A fresh take on the espionage novel genre. Kate is a dynamic and creative character. Her spontaneity, resourcefulness and creativity reminded me of so many smart women that I know. I enjoyed being in her head and watching her think!”
—Totsie McGonagle, Buttonwood Books (Cohasset, MA)

“WOW, what a page turner! Kate Rees, a sharpshooter raised on an Oregon ranch, accepts a top-secret mission to assassinate Hitler while the Fuhrer is in Paris. Kate accepts this life and death preposterous mission because it is an opportunity for her to avenge the deaths of her British husband and infant daughter. Dropped into the Nazi-occupied city, Kate follows specific instructions given to her by the director of a covert section of British intelligence. When the attempt fails, Kate realizes—too late—that the mission was extremely well planned, with one exception: there is no escape strategy for her. Trapped in Paris, she is pursued by Gunter Hoffman, the German police officer given 36 hours by the Fuhrer to find the sniper. Kate is forced to work independently, and must rely on her wits as a cat-and mouse hunt ensues. Who is to be trusted? Who could be a spy, ready to turn her over to the Nazis? Each chapter ends in a cliff-hanger, as the plot unfolds through the streets of Paris, told from three viewpoints: the Germans, the British, and Kate. I don’t know when a book has so held me captive—I couldn’t put it down until I reached the conclusion on the final page!”
—Mary Fran Buckley, Eight Cousins (Falmouth, MA)

“This is a second world war thriller with a Paris setting. The heroine is Kate Rees, an American markswoman working for British intelligence. She is dropped into France with a mission to assassinate Adolf Hitler. The mission takes many twists and turns, with Rees meeting and overcoming many challenges while working her way out of France after a failed assassination attempt. The book is well written and moves along at a brisk pace. The reader will find the many situations faced by Rees as believable. Cara Black has an obvious 'feel' for Paris, especially during the Nazi occupation. She also shows how capable a woman can be facing adverse circumstances.”
—John McGonagle, Buttonwood Books (Cohasset, MA)

"Highly entertaining . . . Three Hours in Paris is an exciting page-turner that will be particularly enjoyable for readers who appreciate a heroine who defies all odds and expectations."
—Seira Wilson, Amazon Book Review

“So authentic you can practically smell the fresh baguettes and coffee.”
—Val McDermid

“The real joy of Murder on the Left Bank is in its familiar cast and its thoughtful, witty, occasionally melancholy evocation of Paris, the city where we keep so many of our most beautiful ideas about what life might mean.”
—USA Today

“Leduc is a refreshing and entertaining guide to Parisian neighborhoods and cultures, especially those that well-established tourist routes typically pass by. Let’s hope she never runs out of districts to scoot around in.”
—The Seattle Times

“[Black] draws the reader into the intricacies of Paris while driving the mystery forward to make it an ultimate page-turner.”
—The San Francisco Chronicle