The Birth of Kitaro (Paperback) 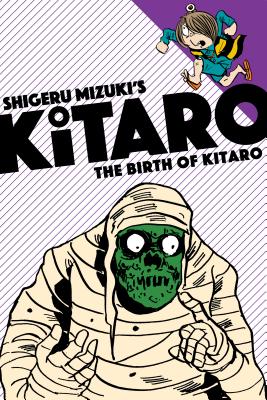 By Shigeru Mizuki, Zack Davisson (Translated by)
$12.95
On our shelves now:

Japanese stories of the supernatural brought to life. I am enthralled by Mizuki's art and storytelling. Specifically his tellings and re-tellings of Japanese ghost stories; best exemplified in his zany adventure/horror series: GeGeGe no Kitaro. Start here! The Birth of Kitaro. Learn the origin story of Kitaro and his eye-ball Father (Don't worry, it gets weirder.), as they meet, befriend, defeat, and take on spirits, ghosts, and horrors. These are stories to read before bed and share with friends.

Meet one of Japan's most popular characters of all time-Kitaro, the One-Eyed Monster Boy

The Birth of Kitaro collects seven of Shigeru Mizuki's early, and beloved, Kitaro stories, making them available for the first time in English, in an all-new, kid-friendly format. These stories are from the golden era of the late 1960s, when Gegege no Kitaro truly hit its stride as an all-ages supernatural series. Mizuki's Kitaro stories are both timelessly relevant and undeniably influential, inspiring a decades-long boom in stories about yokai, Japanese ghosts, and monsters.

"Kitaro's Birthday" reveals the origin story of the yokai boy Kitaro and his tiny eyeball father, Medama Oyaji. "Neko Musume versus Nezumi Otoko" is the first of Mizuki's stories to feature the popular recurring character Neko Musume, a little girl who transforms into a cat when she gets angry or hungry. Other stories in The Birth of Kitaro draw heavily from Japanese folklore, with Kitaro taking on legendary Japanese yokai like the Nopperabo and Makura Gaeshi, and fighting the monstrous recurring villain Gyuki.

With more than 150 pages of spooky and often funny comics about the titular yokai boy, The Birth of Kitaro is the perfect introduction to the award-winning author Mizuki's most popular series, seminal comics that have won the hearts of Japanese children and adults for more than half a century.

Born March 8, 1922 in Sakaiminato, Tottori, Japan, Shigeru Mizuki is a specialist in stories of yokai and is considered a master of the genre. He is a member of the Japanese Society of Cultural Anthropology, and has traveled to more than sixty countries around the world to engage in fieldwork on the yokai and spirits of different cultures. He has been published in Japan, South Korea, France, Spain, Taiwan, and Italy. His award-winning works include Kitaro,Nonnonba, and Onward Towards Our Noble Deaths. Mizuki's four-part autobiography and historical portrait Showa: A History of Japan won an Eisner Award in 2015.

"There are incredibly detailed establishing images, quite beautiful, long shots with very little negative space […] these contrast with the more event-driven panels, which tend to be much simpler and are much closer to the characters. This is a book that will appeal to children and adults alike, and I’m already looking forward to the next volume."—The Quietus

"There’s no doubt that Birth of Kitaro is a great entry point into Kitaro’s yokai filled world, and it’s worth picking up."—The OASG

"Originally published in magazines between 1966 and 1968, these humorous and spooky entries introduce readers to one of the most famous characters in Japan."—Andrea Lipinski, School Library Journal

"Its deep background in Japanese mythology and folklore can make it slightly less accessible to western audiences, until you start to read it and get sucked in by Mizuki’s ability to spin a yarn."—Paste

"[The] Birth of Kitaro is a great read for any young readers or fans of Shigeru Mizuki or yokai."—Manga Xanadu

“Readers will see why Kitaro has been a popular character for decades in Japan and will want to read more volumes to discover the rest of his adventures.”—Library Journal

"... a fantastically eerie read ... for long time readers, [Shigeru Mizuki's] early [work] is a great historical marker of his growing talent, allowing to see where this master artist got his start."—Fangoria on The Birth of Kitaro

"The aesthetics on display in The Birth Of Kitaro are diverse, and Mizuki’s ability to affect three or four different complex styles in the same story is mesmerizing. His stories are quaint and fun—certainly enjoyable to read—but the way he draws establishes him as a titan, and his reputation as a major talent is confirmed again and again."—AV Club

"If you haven't experienced Kitaro before, this is a perfect place to start."—The Anime News Network