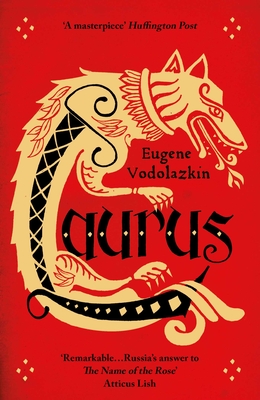 By Eugene Vodolazkin
$14.99
On our shelves now:

Like much great fiction, Laurus compresses a particular vision of human life into the person of a flawed but worthy individual. Here are moments of intense horror, of joy, and of despair. During periods when existence seems to have stalled for our hero--that nothing will ever again improve or change--the reader is led into transcendent meditation and reflection on Time and on the soul's dreadful-and-glorious progress. It is no small bonus that this book is free of trendy political and social agendas and is oblivious to what Owen Barfield termed "chronological snobbery" (the imperious disdain which modernity showers on the "ignorant" past). Finally, this is one of a precious few books which has reinforced my sense that Time is neither linear nor cyclical, but spiraling -- curved in its horizontal direction, but always with an inevitable, vertical tension.

It is a time of plague and pestilence, and a young healer, skilled in the art of herbs and remedies, finds himself overcome with grief and guilt when he fails to save the one he holds closest to his heart. Leaving behind his village, his possessions and his name, he sets out on a quest for redemption, penniless and alone. But this is no ordinary journey: wandering across plague-ridden Europe, offering his healing powers to all in need, he travels through ages and countries, encountering a rich tapestry of wayfarers along the way. Accosted by highwaymen, lynched in Yugoslavia and washed overboard at sea, he eventually reaches Jerusalem, only to find his greatest challenge is yet to come.

Winner of two of the biggest literary prizes in Russia, Laurus is a remarkably rich novel about the eternal themes of love, loss, self-sacrifice and faith, from one of the country’s most experimental and critically acclaimed novelists.

Eugene Vodolazkin was born in Kiev and has worked in the department of Old Russian Literature at Pushkin House since 1990. He is an expert in medieval Russian history and folklore. His debut novel Solovyov and Larionov (Oneworld, 2018) was shortlisted for the Andrei Bely Prize and Russia’s National Big Book Award. Laurus, his second novel but the first to be translated into English, won the National Big Book Award and the Yasnaya Polyana Award and was shortlisted for the National Bestseller Prize, the Russian Booker Prize and the New Literature Award, and has been translated into eighteen languages. He lives in St Petersburg.

Lisa C. Hayden’s translations from the Russian include Eugene Vodolazkin’s Laurus, which won the Read Russia Award in 2016 and was also shortlisted for the Oxford-Weidenfeld Prize along with her translation of Vadim Levental’s Masha Regina. Her blog, Lizok’s Bookshelf, examines contemporary Russian fiction. She lives in Maine, USA.

'At once stylistically ornate and compulsively readable...delivered with great aplomb and narrative charm... Many readers are likely to find the book enchanting.'
— TLS

‘A remarkable novel… Russia’s answer to The Name of the Rose.’
— Atticus Lish, author of Preparation for the Next Life

'Interweaving an impressive array of images, stories, parables and superstitions, Vodolazkin builds a convincing portrait of 15th-century Europe... Laurus cannot be faulted for its ambition or for its poignant humanity. It is a profound, sometimes challenging, meditation on faith, love and life's mysteries.'
— Financial Times

‘In Laurus, Vodolazkin aims directly at the heart of the Russian religious experience and perhaps even at that maddeningly elusive concept that is cherished to the point of cliché: the Russian soul.’
— The New Yorker

‘Vodolazkin’s spiritual odyssey transcends history, fusing archaism and slang to convey the idea that "time is a sort of misunderstanding"… Vodolazkin explores multifaceted questions of ‘Russianness’ and concludes, like the 19th-century poet Fyodor Tyutchev that Russia cannot be rationally understood. This is what leads him, with a gradual, but unstoppable momentum, to place faith and the transcendent human spirit at the center of his powerful worldview.’
— Washington Post

‘Laurus is not at all a typical historical novel. It uses conscious and outrageous anachronisms; it is funny, subversive and vivid in its evocation of medieval life in Russia and the Middle East; and it plants questions about faith, irony, self-deception and integrity in the style of the greatest Russian fictions.’
— Rowan Williams, New Statesman, Books of the Year 2016

‘Love, faith and a quest for atonement are the driving themes of [this] epic, prize-winning Russian novel… With flavours of Umberto Eco and The Canterbury Tales, this affecting, idiosyncratic novel…is an impressive achievement.’
— Kirkus

‘Laurus is in one breath, a timeless epic, trekking the well-trodden fields of faith, love and the infinite depth of loss and search for meaning. In another, it is pointed, touching, and at times humorous, unpredictably straying from the path and leading readers along a wild chase through time, language and medieval Europe…Vodolazkin has found a subtle balance and uses it to impressive effect.’
— Asymptote

'Vodolazkin’s expertise in the medieval world rounds out this tale that defies the restrictions of this long-ago time and place in its treatment of universal human pains and regrets.’
— World Literature Today

'A masterpiece by any standards...the novel flows in the spirit of the invincible Russian literary tradition of pathos and Dostoevskian depth; and at yet other times, it is a pure philological triumph... Vodolazkin's archaic seasoning is complemented by his sublime sense of humour... As Zachar Prileptin said before me, I am simply filled with an unending sense of happiness that such a novel exists. You open it and close it, something has happened to your soul.'
— The Huffington Post UK

‘Vodolazkin, an expert in medieval folklore, transforms the dreadful past into a familiar stage on which to explore love, loss, and fervent perseverance… In a stroke of brilliant storytelling, Vodolazkin forgoes historical accuracy and instead conjures a cyclical, eternal time by combining biblical quotes, Soviet bureaucratese, and linguistic conventions of the Middle Ages (in this translation, rendered into Old English). The result is a uniquely lavish, multilayered work that blends an invented hagiography with the rapturous energy of Dostoevsky’s spiritual obsessions.’
— Booklist

‘Winner of Russia's National Big Book Prize, this saga of 15th-century Russia captures both its harshness and its radiant faith in a narrative touched by the miraculous.’
— Library Journal

‘A fine balance between the ancient and archaic...the ironic and the tragic.'
— Time Out

'There are books that are necessary. Start with this one.'
— Orthodox Life Magazine

'Always rich in ideas. Vodolazkin explores multifaceted questions of "Russianness" and concludes...that Russia cannot be rationally understood. This is what leads him, with a gradual, but unstoppable momentum, to place faith and the transcendent human spirit at the centre of his powerful world view.'
— Russia Beyond the Headlines

’Vodolazkin is a beautiful storyteller...an epic journey novel in all the best traditions. There are countless colourful characters, exciting twists of fate and profound truths in the protagonist’s words and deeds… The Idiot meets The Canterbury Tales meets The Odyssey.’
— Russian Life