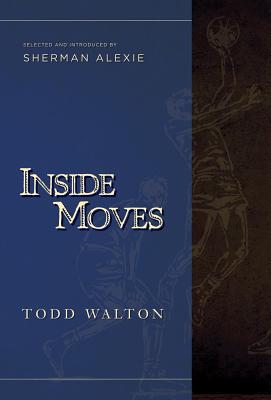 Jerry Maxwell and his good friend Roary are both handicapped. They divide their time between Max's bar in San Francisco and the bleachers of the Oakland Sports Complex to cheer on the Golden State Warriors. After a failed suicide attempt leaves a man named Roary partially crippled, he finds himself living in a run-down house in Oakland, California. He spends a lot of time at a neighborhood bar, which is full of other disabled people, and becomes best friends with Jerry, the barman with a bad leg. Jerry's luck turns round when a professional basketball player loans him the money for an operation to fix his leg. Once he is fully healed, Jerry goes on to become a basketball star, fulfilling his lifelong dream. "Inside Moves" was made into a critically-acclaimed film in 1980 by Richard Donner.
Selected and introduced by celebrated author Sherman Alexie.

Todd Walton's first novel, "Inside Moves," was published in 1978 by Doubleday and made into a motion picture directed by Richard Donner. Todd's second novel, "Forgotten Impulses," was published in 1980 by Simon and Schuster and chosen by "The New York Times "as a notable book of the year. "Louie & Women "was published by Dutton in 1983, "Night Train "was published by Mercury House in 1986, and "Ruby & Spear" was published by Bantam in 1996. His non-fiction work "Open Body: Creating Your Own Yoga "was published by Avon in 1998. In May of 2000, 10-Speed published "The Writer's Path," a book of Todd's original writing exercises. In addition to his writing, Todd is a professional musician. His wife is the cellist Marcia Sloane. Todd's latest CD is "Mystery Inventions, " duets for piano and bass, and Todd also plays the incidental piano music on the audio versions of his books.

Sherman Alexie is the author of, most recently, "War Dances" from Grove Press, and the poetry collection "Face" from Hanging Loose Press. He is the winner of the 2010 PEN/Faulkner Award, 2007 National Book Award for Young People's Literature, 2001 PEN/Malamud Award for Excellence in the Short Story, and a Special Citation for the 1994 PEN/Hemingway Award for Best First Fiction. Smoke Signals, the film he wrote and co-produced, won the Audience Award and Filmmakers Trophy at the 1998 Sundance Film Festival. He lives with his family in Seattle.