The Journal of Jules Renard (Paperback) 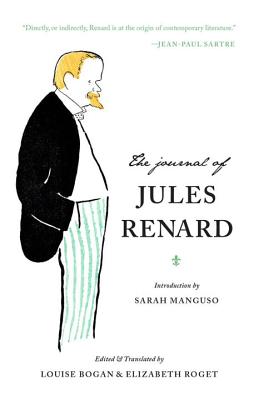 If you just opened to any page in this book and read the first sentence that appealed to you, it would sell itself. In my mind, it leaps off of the bookshelf, into your arms, and being finally introduced, you and it become inseparable.

Jules Renard's life is a strange and joyful mix of the mundane and remarkable. A writer, a father, a politician, and a devotee of the French countryside, Renard ran in circles that included Henri de Toulouse Lautrec and Sarah Bernhardt. He inspired W. Somerset Maugham, and Julian Barnes' Nothing to be Frightened Of is largely devoted to Renard. Yet why is he virtually unknown today? I can't answer that, but I can convince you to remedy the situation.

This highly edited journal is really not so much a biography, but a collection of observations and anecdotes from Renard's lovely life. His tales are humorous. His quick wit, keen sense of irony are sure to charm you. Each small glimpse into Renard's life is quite simply, a delight. Bonus: Renard's obvious devotion to nature and his ability to write it beautifully makes this the perfect book to accompany you on all your summertime outdoor adventures.

Spanning 1887 to a month before his death in 1910, The Journal of Jules Renard is a unique autobiographical masterpiece that, though celebrated abroad and cited as a principle influence by writers as varying as Somerset Maugham and Donald Barthelme, remains more of a cult object in the United States.

Throughout his journal, Renard develops not only his artistic convictions but also his humanity as he reflects on the nineteenth-century French literary and art scene, and on the emergence of his position as an important novelist and playwright in that world. Through a mix of aphorisms and observations, short scenes, gossip, jokes, and meditations on life and art, Renard portrays the details of his personal life—his love interests, his position as a socialist mayor of Chitry, the suicide of his father—that often appear in his work.

In recent years, the fragmented memoir has grown in popularity, and there’s been a resurgence of diary as an artistic form. Once again, Jean Paul Sartre’s assessment that “directly, or indirectly, Renard is at the origin of contemporary literature” rings true. In a new introduction, Sarah Manguso—whose groundbreaking nonfiction incorporates elements of diary and aphorism—both contextualizes and celebrates Renard’s seminal journal.

Jules Renard (1864-1910) was a French author and member of the Académie Goncourt, most famous for the works Poil de Carotte (Carrot hair) (1894) and Histoires naturelles (Natural Histories) (1896). Among his other works are Le Plaisir de rompre (The Pleasure of Breaking) (1898) and Huit jours a la campagne (Eight Days in the Countryside) (1906).

Sarah Manguso is the author of seven books including 300 Arguments, a genre-defying work of nonfiction; Ongoingness, a meditation on motherhood and time; The Guardians, an investigation of friendship and suicide; The Two Kinds of Decay, a memoir of her experience with a chronic autoimmune disease, and Hard to Admit and Harder to Escape, a collection of very short stories. She is also the author of the poetry collections Siste Viator and The Captain Lands in Paradise.

Jules Renard's endlessly amusing journals are available again, and whether read straight through or dipped into at random, they're a marvel to behold. . . readers of this work are certainly encouraged to laugh throughout at his singularly savage wit.

Directly, or indirectly, Renard is at the origin of contemporary literature.

You are holding a secret book, which influenced many great writers. I received it first from Donald Barthelme who received it from Susan Sontag. Once you have found it, you will find again and again that many of the writers you love have read it. Renard's way with the detail is unforgettable. I have never forgotten the starfish placed like a badge on a little boy's swimsuit at the beach, his baby arms and legs wiggling like the starfishes. Renard writes about spiders, about the moon, and the poetry he makes from the things his eyes tell him is joyful, particular-the world in a detail.

The irresistibly quotable Journal of Jules Renard, a record of Renard's development as a writer in fin de siecle France, demonstrates his gift for quips, aphorisms, and striking observations.

Poetic, amusing, instructive, melancholic—Renard's writing should find its way to the shelves of writers and lovers of fine writing. How ideal to have sentences like this at hand: 'In the path, the caterpillar plays a soundless little tune on its accordion.'